Around 9 years ago the 2 gents pictured below started a business. It had the mantra of getting companies closer to their consumers. Plus some weird stuff about walking in their shoes… don’t ask.

They had seen the truth that many companies all too often surrounded themselves with what was familiar. That they rarely bothered with getting out and discovering what it was really like “out there” for customers in their day-to-day lives.

They told – and still tell – the story of Nancy Snyder, who was the Innovation Director @ Whirlpool back in the early 2000s.

About how she took her entire Board to consumers’ homes to watch them fill washing machines.

How the Board noticed that when people lent down and then got back up, they tended to lean on the machine and make a little grunting noise.

That insight led to the launch of the raised washing machine on a plinth. A new multi-million dollar category.

It was an insight that could only ever have been discovered because the Board stood next to the consumer. In an era when most companies struggled to get even their brand managers out of the building.

“Customer closeness is just a slogan”

That’s what John and Alistair preach to us in the office.

“Many say it. Yet, many have never done it,” says John.

“Or just made the odd token gesture,” he quickly adds.

Both of them could reel off company after company, some of the biggest brands on the planet, citing their annual reports and stakeholder updates which claimed (feigned?) interest in this proximity to end-users.

Grandly stating that “customer-centricity is at the heart” of what they do. That they must “remain relevant to the consumers”. To “get closer”. To “walk in their shoes” (don’t ask).

Both gentlemen have been telling us this for years.

Making us write it all down.

It was kind of like being made to wear a t-shirt for a band you’ve never seen.

Turns out they were right all along.

Consumer closeness is a fib

The fabled closeness is actually far from reality.

How do we know?

Because next to no-one ever seeks it out.

They say the search bar in an internet browser is the closest you’ll ever get to anyone’s truth. It reveals our open naked questions and intent.

And it appears that in that search bar, people don’t seek out consumer closeness. They are not looking for ways to do it. Or information on it. Or best practice. Best case studies… nada (pretty much).

You would think companies with their mantras of getting “close to customers” would be searching out new and better ways of doing that. But they aren’t.

Less than 50 searches per month, in fact.

On a good month.

Globally (albeit in English).

Linkedin gives its own estimates of people interested in marketing as 27 million +. 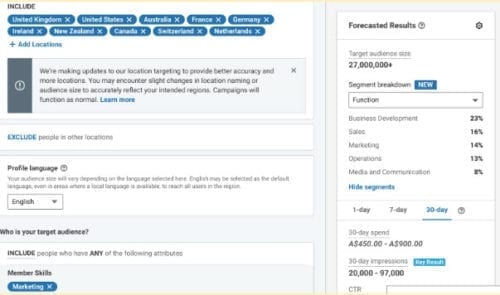 That’s 27 million who apparently aren’t really interested in consumer closeness? Nor do they care much for consumer empathy for that matter (also a rarely used search term).

There *are* caveats (as always in life) – and all this is done slightly in jest – to prod – provoke a conversation or two – but the numbers do suggest it’s all just lip service.

So, yes. The Watch Me Think Gents have been right all these years. And don’t they just love that 🙂

The unvarnished truth in internet searches suggests that consumer research projects often do not go looking to get closer to those they seek to address. It’s just lip service.