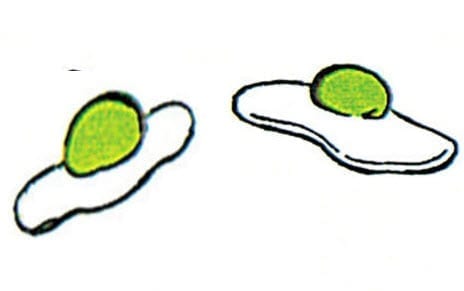 Martin Weigel (yes, yes, we like him lots) shares 13 pieces of advice to help you craft better strategic narratives.

This is particularly smart:

Steven Spielberg had long wanted people to experience the dislocation he’d felt as a child of divorced parents. Working back from that, he eventually arrived at the story of E.T… Be clear on what you want people to do, and work back from that.

I thoroughly enjoyed this 88 second video from Kurt Vonnegut on writing a short story. Interestingly, his

…is very similar to Weigel’s movement or colour advice.

Did you know Dr Seuss’s Green Eggs & Ham was written because of a bet that he couldn’t do so using only 50 different words? Me neither. Turns out such constraints can actually inspire new ideas.

And then this story from Dave Trott on the origins of the phrase Bob’s your uncle was a revelation. For all our readers not from the UK – stick on any film featuring a Brit, and Bob’s your uncle, you’ll likely hear someone saying it.

Keep rolling in the deep

We’re at our most valuable during deep, undistracted work.

However, many of our working environments are set up in a way that prevents us from achieving such magic. Think open plan layouts, phones, emails etc, etc.

Richard Huntington shares his tips for getting your mind fit for deep work.

you are not paid to be on top of things, you are paid to get to the bottom of them

…is a delight and now firmly stuck to my desk.

Continuing on from this, Jan Gooding writes about the difficulty of insisting on more time to think. This time related to the briefing process. An important read if you are someone who has to do such things.

Zed of course. But we can debate the value of broad-brush segmentation until the cows come home. However, for those interested in said Gen Z, here are 995 of them in their own words.

New Republic provides a somewhat more sceptical approach, summarising what we know so far and warning of emblematic, generational stereotypes:

61 million young people will live 61 million different lives – about which, for now and maybe forever, it would be futile to generalize.

Why did Shoes of Prey (a US bespoke shoe company) fail? Because it listened to customers.

It’s an interesting exploration of saying vs doing, and gives advice on how to ensure the research you pay for isn’t rubbish:

Be sure to interrogate your research team about how they will get to real rather than intended behaviour.

On another bombshell, 800 scientists are saying it’s time to abandon statistical significance with the obvious implications for quant that I 113% agree with. No significant margin of error there, as I’ve never deviated from a stand(ard).

P.S. We’re running an event in London in May 2019 on Consumer Closeness. Let me know if you fancy joining us, especially as we’ve got discount codes for those of you who make it to the bottom of these posts.

Here’s just some of the things you can get an upper hand on by attending: