Dun dun duuuuun! (wait for it…)

We’re all being told to tell stories. And we all know the format. A beginning. A middle. An end… ?

(Long but good read:) “Conclusions are so last century.”

And so it is perhaps from TV land that we should take a lesson into Market Research land.

In that we should never have: The End (roll credits).

That we need to look to Repeat.

To explore what happens if you later change the personality of the main character(istics).

As for those stories that are told through film (knock knock!) this 7 minuter looks at the use of smartphones – and the technology behind their interactions with us – on the emotional level. Name 10 of the films shown in that and I’ll buy you a coffee.

There once was an ugly article

With words all withered and worn (just to finish that line off).

But. Yes. Sometimes an article comes along that we disagree with.

In fact, disagree with so much, and which is so badly written, that, contrarily, we feel obliged to share it!

You know, just to make sure everyone knows what colour, type and weight of page we’re on.

And so, ladies and gentlemen (drum roll), I give you the holier-than-thou advertising industry lecturing the market research world on credibility.

As they say, you couldn’t make it up.

All he needs is a poncho and a cigarillo

Extremely relevant to the previous post, and riding in (again) to save the day, Dave Trott on ignorance and the Dunning-Kruger effect:

“The more ignorant people are, the more likely they are to overrate their knowledge and ability.”

Counter to that of course:

“The more intelligent they are, the more likely they are to underrate themselves.”

Which brings us nicely to a piece for everyone who barely feels like they’re holding it together – myself included:

“In spite of whatever it is that keeps picking, picking, picking little pieces of your shell away, you still manage to make it to school or work, or to pick up the kids, or to go to the store, or hell, to walk the dog. And for that, I want to say: Good job.”

The Museum of Failure

Finally, the museum of failure in Sweden is a must-visit for everyone.

Or, at the very least, a must-learn-from. 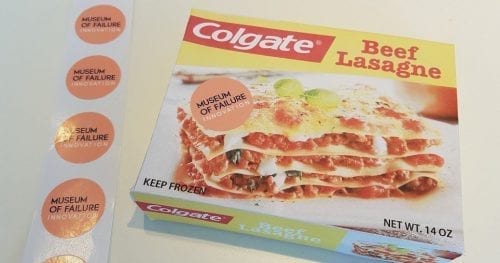 “True innovation requires learning from the complexities of each failure—a skill that [Samuel West] says, most companies fail to hone. Opening this June in Helsingborg, Sweden, the museum seeks to de-stigmatize personal and professional failure.”

Finding out what the consumer thinks of a new product before it’s launched should help reduce that failure rate.

Especially if you involve them early.

With the right method…

…now where on Earth could you find someone who does something like that? 😉

Aim low and settle for the mediocre

Ah yes. One of the classic observations on life, and how we lead it (can you name the film?) But it would also be a fitting title for this see the last edition of The100)

Talking of mediocre… it seems the advertising industry’s introspection continues.

This time they’re telling everyone why their ads aren’t funny any more.

Here’s a tip adland: might it be that you’re just not funny anymore? Or rather you don’t know what’s funny anymore because, in your Soho echo chamber, everyone laughs at your jokes?

Saying that, we did like this one from the US for Mother’s Day. 18 rating: it contains swear words. But not as you know them.

Why your brain loves ordered things

And now we can explore why.

The goal was to build “the strangely familiar.”

Apparently, people don’t want the truly new – they want the familiar done differently – and there’s a lovely little anecdote about the California Roll for you in there.

Of course, Eastern philosophy has been years ahead of us as usual… “same, same but different” anyone?

We get involved in a lot of NPD. Does the familiar-done-differently do better than the truly new…? We’ll get back to you.

The 2 types of millennials

And finally, whilst one of our colleagues tries to convince us he’s a millennial… he isn’t… I mean, really …

But it appears he could take solace in almost being considered an old millennial.

One thing we do know about millennials: if you put the M-word in an email title, it gets the highest open rates. Silly, but true.