The100: Efficiency bubbles, compounding gains and bowls of cereal

The ever magnificent Rory Sutherland explains this is partly due to the efficiency bubble. His topical tale to exemplify efficiency offsetting effectiveness is golden:

A few years ago, the uncle of a friend of mine gave his (now former) wife a huge bunch of roses on 13 February. “But Valentine’s Day is tomorrow,” she remarked. “I know,” he explained. “That’s why I got them today – they’re much cheaper.” She threw them in the bin.

Also, one of the quotes that struck most true was how marketing is judged these days:

…not as a source of value creation but as a cost to be minimised.

He could just as easily have been talking about the current state of insights, don’t you think?

The growing popularity of brands showcasing varying consumer behaviours continues with Kellogg and the perfect bowl of cereal.

We believe wholly in the power-of-difference and making sure people are aware that just because you do it, doesn’t mean everyone else does – though I think focusing on extremes isn’t necessary.

Oh, and porridge + milk + hot chocolate powder = the breakfast of dreams… If that’s your only takeaway from this issue of The100, I’m cool with that. 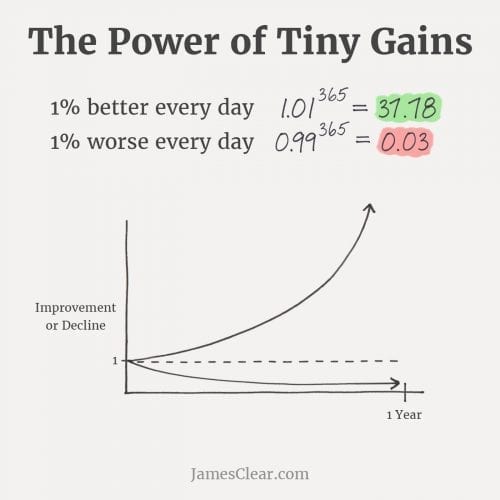 When did anybody ever say ‘I wish I procrastinated more’?

Here’s what’ll happen if you start today on that thing you kept saying you would.

Or, as per the extract from James Clear’s New York Times bestseller, Atomic Habit, focus on the marginal gains and compounding 1% percent improvements.

Almost a delay in getting The100 to you this week after I became completely obsessed with a site where you can look at the relative & realistic sizes of countries.

Thankfully, somebody has done a lot of the comparisons already. Who knew Algeria was the 10th biggest country in the world? Hours of fun.

And, for a relatively small landmass, Britain has had some enormous howlers recently – no, not that howler. Here are the funniest (or perhaps strangest) moments on British TV in 2018.

Plus an honourable mention to Mike Coupe (CEO of Sainsburys) and his singing of We’re in the Money just after the merger with Asda had been announced – h/t Neil Perkin for this one.

Anyone coming to IIEX Amsterdam? Let me know if you are, it would be great to say hello. They’ve agreed to set me loose on Tuesday’s Applied Behavioral Science track, so swing by if you fancy hearing about the widening empathy gap, which I’m sure you can relate to 😉