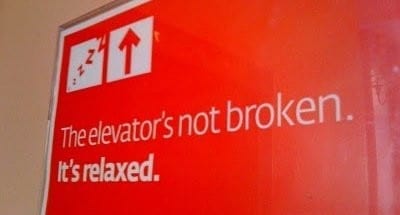 The100: The Case of the Slow Elevator

It’s not what you do. It’s why you do it.
It’s a Simon Sinek mantra. Though not everyone has been comfortable with it.

“…everyone has a why […], but for the longest time I found that profoundly annoying and irritating, because I didn’t.”

According to Tim Le Roy, the interim secret is to borrow someone else’s “why”.

The Case of the Slow Elevator
When an elevator/lift is too slow, do you make it faster, or put in a mirror?

This (long) article focuses on the understanding and reframing of problems:

“The pattern is clear: spurred by a penchant for action, managers tend to switch quickly into solution mode without checking whether they really understand the problem.”

Take off the headphones
The great Sir John Hegarty – he of the H in BBH – on the subject of creativity.

‘No great idea has ever come out of a brainstorming meeting.’

Admittedly, for an industry we like to constantly throw bananas at, advertising boasts a lot of our heroes.

“I just don’t like it”
Have you ever had a comment like that? Mike Davidson describes how to give helpful feedback. And it could be applied to all situations.  If you’re not nodding at the suggestions he makes, I’ll eat my hat (I already ate my shoes in the past – ask me about it one day).

Consumer > People > Mammal
“…if you need reminding that your customers/consumers/users are people you have bigger problems.”

Russell Davies writes brilliantly on the people vs. consumer vs. customer debate. It’s one we dip in and out of here at WMT HQ.

In other news, Google (Deepmind) have used YouTube to create a database of humans doing stuff that helps AIs understand us. Brilliantly, it seems it’s easier to identify us riding mechanical bulls than eating doughnuts – who knew?

And as you know by now, we’re always keeping an eye out for all things storytelling, so sticking with Planet Earth, here’s how the infamous tale of the Iguanas vs the Snakes can help you construct your own narratives.

The first and best customer theory
Of course, the big news of the last few weeks has been Amazon buying Wholefoods. After trawling through the many opinion pieces, this one, we think, nails it.

Other quirky stuff we liked
The New Yorker published a great (nostalgic) piece on what life was like before the Internet, on the internet.

“Before the Internet, you could laze around on a park bench in Chicago reading some Dean Koontz, and that would be a legit thing to do and no one would ever know you had done it unless you told them.”

Or maybe watch this about the world’s first Milk Sommelier – yes, I know.

Or this on Fermi problems (Fermi problems typically involve making justified guesses about quantities). It has some interesting and surprising calculations. For example, that key question that’s been bugging you for most of your life: how much toilet paper is used in New Zealand each year?

Talking of spurious correlations – did you know that cheese consumption is correlated to the number of people who die by getting tangled up in their bedsheets? I’ll give up my sheets before my cheese. Any day.