Advertise or not to advertise

There’s much debate about whether budgets should be cut. Do we market (research) our way out of this crisis or is everyone right to stop?

Mark Ritson argues that the best marketers will be upping, not cutting, their budgets.

However, Richard Shotton points to a flaw in the data used to show better performance of brands who increased their ad spend during a recession:

The set of brands that can consider increasing their spend in a recession are likely to include far more successful and financially healthy brands than the other groups. Much of the improved performance will be due to the different state of health they entered the recession.

Mark Ritson (again) is on tremendously spiky form (also again) on what will change after coronavirus.

So, ignore the pneuma…. The only thing that is going to really change dramatically after coronavirus is the number of columns from hacks predicting everything is going to change.

Instead, we should focus on the unchanging consumer and their unchanging needs:

Jeff Bezos said something similar more recently. He complained that most people ask him about what is going to change over the next 10 years. Bezos was far more interested, he explained, in what was not going to change in those 10 years because “you can build a business strategy around things that are stable in time”

In terms of things that have changed, there is a fabulous weekly newsletter called Exploding Topics which analyses searches, conversations and mentions across the internet. This week it includes Jelly Fin and Forest Bathing. Ace. 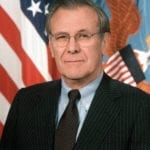 Why is this Interesting (their daily email is something I always look forward to) recently reminded me of Donald Rumsfeld’s usage of the knowns and unknowns framework at a Defence Department briefing:

It is hugely applicable to research and I now find myself regularly coming back to it.

Bob Hoffman has gifted us a lesson in semantics, revisiting the differences between puzzles and mysteries and what we can learn from them.

In our industry we look at questions such as “How do we sell more stuff?” or “who is our target customer?” and treat them as puzzles, not mysteries.

Research is commissioned. Spies are sent out to live with customers, or to interview them, or hold group discussions with them… On the other hand, most companies have stacks of research and reams of data about their customers and about their industry. This mountain of existing information is almost never consulted.

Not that I’m trying to do myself out of a job, but…

The key is to break down the tyranny of titles and find out who our “slightly batty geniuses” are… Before spies are sent out, these people need to be exposed to all the information that exists and allowed to weigh in on the questions we’re all trying to solve.

Get nostalgic about nostalgia

In a recent flurry of nostalgia I bought a pack of Club Biscuits (orange flavour, obviously). Interestingly, nostalgia triggers a reward pathway in our brains and also fosters creativity:

So Club Biscuits for me each time I write this newsletter then.

The interiority of David Beckham

Another part of the past worth revisiting is the BBC’s wonderful library of Desert Island Discs episodes. I’ve enjoyed it for years. 2,000 episodes in and this New Yorker piece pulls out some nuggets. My favourite of all time was the David Nott episode – definitely got something in my eye.

It’s Nice That have done a really interesting piece on the dying art of UK courtroom illustrations. It’s currently illegal to make an image in a British court. The artists instead have to rely on their memories and note taking to make their images. A wonderful quirk.

Sony World Photography Awards have revealed the winners and shortlist for its Open competition. I couldn’t stop staring at this wildlife image, this culture image (oh Iggy) or this motion image. If you fancy having a pop next year, Nikon have made all of their courses free for the entire month of April.

P.S. For anyone independent or recently furloughed or anyone for that matter, you might want to look at this list of resources/courses that Stephen Brooks has put together across strategy, storytelling, comms, marketing, behavioural economics etc.

Also, check in with people. The parents are not okay.