The100: Anthropocentrism, the ‘right’ mistakes and monks

Just try not to put your neck out as you nod along with everything he says… Open-plan offices have made it harder to concentrate. Email has added an average of 2 hours to the working day. And having convinced ourselves that meetings = work, the average time spent in them is 2 days a week.

And while interruptions have come to feel like part of the job, they shouldn’t be. Daisley recommends trying Cal Newport’s Monk Mode Morning. This is where, twice a week, you allow yourself to have 90 minutes when you are completely uncontactable. Using those 90 minutes to work on one single thing and really putting that refined grey matter to work. 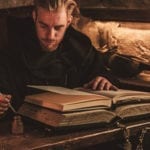 And as much as we shake our fists at the smartphone for destroying our work-life balance, lurking around your desk/bag/armchair/bed is the real culprit?

Are you a sufferer? Worklessness is the reliably terrible feeling of not having done the kind of work that feels valuable to you. It’s one of the 78 new emotions The Cut has published. I’ve started to experience Loktif now my daughter has turned 13. And I often suffer from Angstalgia.

Not all errors are equal

Ian Leslie explains how we need to start making the right mistakes.

He quotes the economist George Stigler who used to say

If you never miss a plane, you’re spending too much time in airports.

Whilst Stigler’s point may be less relevant now we have airport WiFi and laptops (told you they were destroying our work/life balance), there are still mistakes in both directions: one missing the plane, the other wasting time.

Ian’s argument is this…

…mistakes are inevitable. Instead of trying to abolish error from our lives, we should become comfortable with choosing the kinds of errors we want to make.

Farnham Street has been looking into why we believe fake news, conspiracy theories and propaganda.

I give you, the illusory truth effect.

The typical explanation is that it’s a way our brains save energy. Thinking is hard work… The illusory truth effect comes down to processing fluency. When a thought is easier to process, it requires our brains to use less energy, which leads us to prefer it.

It also tends to explain why advertising succeeds and, more importantly, why retractions of misinformation don’t work.

It’s not just about you

All these years I’ve been bleating about putting people on the centre of research, but perhaps, dare I say it, I was wrong. Human-centred design is actually harmful.

Once you realise this, you can ask: is Amazon Prime, surely one of the pinnacles of human centred design, really a service operating in the best interest of their customers? There is no convenience on a dead planet.

[Thanks to Emmet who highlighted this article.]

In a recent Marketing Week podcast, Aline Santos Farhat from Unilever-Brazil discussed (from around 29:10) how their marketing team spent 15 days living near favelas to better understand the needs of their consumers.

Aline describes it as “one of the most transformative moments in Unilever Brazil”, resulting in successful new products and campaigns.

We have an amazing opportunity also using data to enrich our knowledge and our understanding of what’s going on, but nothing can replace the face to face…

Which leads me to the webinar I presented recently on how data is fuelling the widening empathy gap (password: empathy). And also a piece I wrote for the Marketing Society last week on how we can too easily accept the reality of the world with which we’re presented.

Knights, riders and other boring things