When the milk runs out

For the most part, consumer loyalty is about as windproof as a tea bag. Samuel Brealey argued that it is instead convenience that blows consumers from choice to choice.

Is it really loyalty if you have to essentially bribe your existing customers to stay with perks?

It reminded me of this mind shattering piece of genius in Martin Weigel’s 2014 How to (not) FAIL deck:

If you didn’t know already, “sludge” can be defined as:

The Behavioral Scientist has been looking into how sludge can be both intentional and unintentional. Will sludge reduction become a critical business move? Netflix seem to think so:

Netflix announced they will start asking any inactive users if they want to keep their membership. If they don’t want it, or if they don’t respond within two weeks, the company will automatically cancel their service.

For those wanting to do their own sludge audit, have a read of this paper on identifying sludge within an organisation.

Equally as impressive is how John made the video more of a vlog than a traditional presentation. Smart. Why haven’t we done that before?

Swear jars at the ready if you do decide to make your own origami fox.

I wanted to be a Journalist

Vikki Ross is a truly brilliant copywriter and I’ve been reading and re-reading her recent interview in Sonder & Tell. It includes her top 3 tips for writers:

Are you a robot?

It’s dollars to dumplings that budgets are streaming into those 2 illusive letters of A and I. So it might be worth showing the boss this summary of AI fails if they start asking you to join the race to the rainbow.

Just as good is this short video of someone trying to confirm they’re not a robot. Ace.

Another year, another curation of all things interesting from Tom Whitwell in his 52 things I learned in…

Tough to choose a top 3, but if you were to push me…

I’m verging on becoming obsessed with these accidental renaissance photos. The composition. The lighting. Just magnificent. 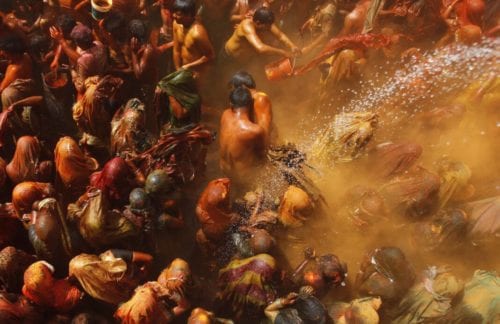 This is the last edition of The100 for the year, I hope you’ve enjoyed reading them.

I’ll be back on the 8th January, 2 stone heavier and with the top 10 articles of 2020. Until then, may I wish you, your friends and your families a welcome and enjoyable break.